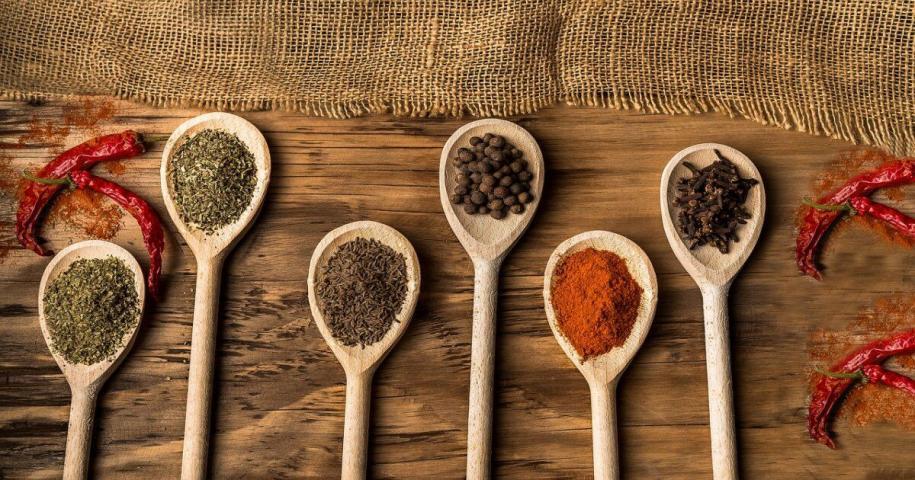 Posted by Touring In Morocco on March 8, 2021 | Featured | No Comments

Spices and Moroccan cuisine, it’s a true love story. Saffron, black pepper, ginger… many are the spices which one finds in almost all the specialties since they are so delicious. We reveal to you our selection of the 10 most essential spices to realize your Moroccan recipes and their benefits.
Moroccan cuisine is undoubtedly the most gourmet and refined of North African cuisines. Considered as Mediterranean cuisine, we find among its traditional recipes Arab, Amazigh, Andalusian, Jewish, and even Asian inspirations.

Among them is Couscous. Which is the favorite dish of the French, the Tagines, the mechoui, the pastilla, the Harira (it is a spicy soup), the Moroccan salad, and the traditional Moroccan pastries made with almonds, honey, and spices. All these dishes use one or more spices.

What are the most used spices in Moroccan cuisine?

The spice most used in Moroccan cuisine is undoubtedly cumin. In cooking in general, cumin is one of the spices that chefs use to prepare a mixture of spices such as Ras-el-hanout. In seeds or powders, people traditionally use cumin to raise the taste of dishes prepared in the kitchen such as Tagines and Couscous. The particularity of cumin is that it brings a warm and spicy taste to dishes. People add it in the preparation of pulses to make them easier to digest. To obtain the best aroma of cumin, it is advisable to add it at the end of cooking.

Moroccans use coriander in the making of soups, minced meatballs, and Tagines. Prefer fresh coriander with a much more delicate flavor than its dry or seeded variant. Attention, its particular taste is not good to the taste of each.

Fresh ginger is refreshingly spicy and peppery; grate it or squeeze it to extract the juice. Dried and powdered, it loses some of its characteristics but remains interesting in many preparations. It goes well with both sweet and salty foods. It would also have anti-inflammatory actions and would help to burn fat. Ginger is an essential element in some Tagines such as the Ginger Chicken Tagine.

Did you know that paprika is a spice native to Hungary? Paprika is very good for its color but also for its taste, sweet, slightly bitter, subtly spicy, and very aromatic. The spiciness of paprika is very mild. It allows you to underline your dishes with a fragrant and slightly spicy touch without fearing the heat of the chilli pepper. Paprika can be used in Fefla for example, a bell pepper salad that is usually eaten as a starter.

Grey, white, black, its perfume differs slightly according to its color. The latter depends on the tree that produces it and/or the maturity of the seed. There is pepper in almost all Moroccan recipes. You can compose your own mixture of peppers, by adding a little coriander and allspice. Avoid pepper sold in powder form which loses its fragrance too quickly. A real pepper deserves its own special mill.

Moroccan turmeric is harvested and dried in South Asia and then powdered in Morocco to preserve all its flavors. People use this spice as a food coloring. Also, this spice regulates the acidity of some dishes and perfumes soups, Tagines, and Couscous. Its therapeutic and medicinal virtues are numerous: at the same time anti-inflammatory, antioxidant, it also treats digestive disorders and eliminates gastric acidity.

We will note two types of cinnamon: the finest, the Ceylon cinnamon, and the Chinese cinnamon which is darker. A lot of people consider cinnamon the queen of spices, it is the oldest spice that still exists. Cinnamon is certainly one of the oldest spices we know. Its appearance in cooking dates back to the end of the 12th century. Originally, cinnamon was reserved for the elite and upper classes. However, it became more accessible over time, until it appeared in more than half of the recipes in 16th century France. This is undoubtedly due to its antiseptic virtues.

In the West, cinnamon is generally reserved for sweet recipes, whereas in Africa and Asia it is readily used in savory recipes. On the sweet side, it enhances the flavor of cakes, cookies, some ice creams, and dairy desserts. In the savory version, it decorates and perfumes pastilla, Tagines, and curry dishes, of which it is a key ingredient.

If garlic comes from the north of the Asian continent, it fits perfectly into Moroccan cuisine. It enhances the taste of dishes and aids digestion. In Morocco, the ancients consider it as “the antibiotic of the poor” because it is very beneficial for blood circulation. One of the most famous Moroccan recipes based on garlic are the Zaalouk eggplant with garlic and tomato.

We’re not going to lie to you, cloves have a tenacious, pungent, pungent flavor. But, we appreciate them because they perfectly enhance the taste of the other spices associated with them. They are perfect for cooking fish and rice.

Let’s finish in beauty with saffron, the spice that is worth its weight in gold. It exists in two forms; in powder or in filaments. Chefs use the powder for braised meats and the filaments for rice and soups. It gives dishes a typical and much-appreciated flavor and color.
While spices are an essential component of Moroccan cuisine, onions are also important as well as many aromatic herbs such as thyme, parsley, rosemary, fennel, bay leaves, basil, and oregano.

Moroccan spices, in bulk and ground:

Whether in pastries or simmered dishes, Moroccans regularly use more than thirty spices in the cuisine. But they are so present in everyday life that they are also essential for health and preventive care. For example, after childbirth, it is not uncommon to see a small bag of herbs and spices suspended above the bed to activate the mother’s recovery.
Discover Moroccan spices cloves are also used to disperse bad smells or moths, saffron is known to dissipate stomach aches and cumin helps to combat the effects of the very disturbing Tourista. Thus, spices have their place everywhere in the daily life of Moroccans.

The Ras-el-hanout is a specific blend, sometimes it contains more than 30 ground spices. In the past, they use it to prepare it themselves, but with the evolution of societies, it is now a rarer fact.
However, for those who would like to get started, it is always possible. In fact, you can buy ground spices or raw in many Moroccan stores or spice merchants. Ready-to-use preparations are made from washed, dried, and ground spices.

Some examples of uses of spices in Moroccan cuisine:

Although some spices are multi-use, others are important in specific dishes and for specific purposes. For example,you can add white pepper to preparations at the end of cooking to give even more strength to the prepared dish, as is cumin, which gives a note of bitterness.
Combined with nutmeg, paprika enhances dishes and sauces, but also used for its ability to color any liquid.
Mint is of course well known for its presence in teas, but it also brings its share of freshness to soups and salads.
Orange blossom water is used in pastry making, but beware: for optimal use, it should not be cooked.
Finally, some people use honey in sweet-salty preparations such as a Tagine.