Goats on trees in Morocco! 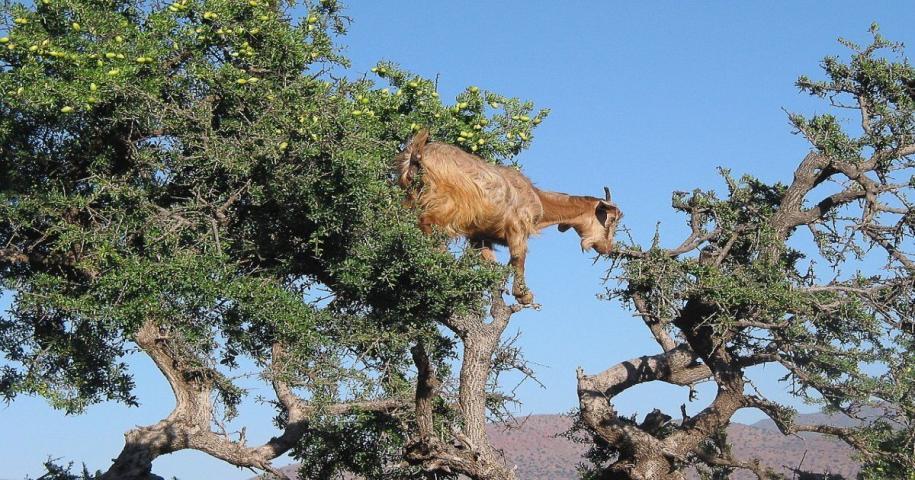 Posted by Touring In Morocco on November 16, 2021 | Featured | No Comments

Tourists visiting Sous Valley often see goats on trees in Morocco which is a very unusual and amusing sight. The branches and trunks of rather tall trees are not birds, but goats. Few people are left indifferent and unimpressed by such a spectacle. People reach for their cameras and take pictures with the acrobatic goats. There are many real photos on the web, depicting a herd grazing in a tree stand.

Many people have quite pertinent questions. What kind of goats have such extraordinary abilities? Why do they feed in this way? We will try to answer them in this article.

Features and climate of the place

Morocco has a very arid and hot climate. The weather and temperature conditions do not favor lush greenery growth. Therefore, there is little fodder for livestock in the area. There is hardly any grassland in the country but many locals try to make a living by keeping livestock.

The picture of goats perched on tree branches is mostly found in the area between the towns of Agadir and Essaouira. This is where the villages called Afra and Imzi are located. The area is situated in the southwest of Morocco and has a particularly arid climate. It is hardly suitable for agriculture. Vegetation in this part of the country is very sparse.

The trees and shrubs that manage to survive in an almost constant drought are also not particularly succulent. Most have branches dotted with thorns. But some species do bear fruit that can be eaten by animals.

Why do goats climb the argan trees?

You could see goats hanging out on the limbs of Argan trees, chowing down on some green or brown bean-like fruit as you drive across Morocco. Many animals would avoid climbing the tree since it is spiky and has thorns, but these goats are in it for the sweet fruit. In reality, the cloven-hooved youngsters are persuaded to climb by their love of the fruit.

The goats are determined to get to this wonderful feast because the country’s natural food sources for animals are limited. If they’ve eaten all of the season’s low-hanging fruit, they’ll climb up into the branches and consume whatever’s left.

What kind of trees do goats climb in Morocco?

Goats in search of sustenance have found a way to feed on the fruit of the argan tree. The tree has adapted to the harsh, dry climate and grows almost everywhere in southwest Morocco.

Mature Argan trees are usually about ten meters tall. Their branches spread out widely over several meters from the trunk. The crown has foliage and fleshy fruit that resembles a plum tree in appearance. These are the fruit that the tree-going goats in the area are adept at gorging themselves on. They cleverly climb the branches and feast there.

The argan fruit contains very valuable seeds. They are used to produce one of the most expensive vegetable oils, argan oil. Its price on the world market may be up to 100 dollars per 1 liter. The oil is used in medicinal cosmetology and cooking.

Goats grazing on argan trees do not eat the seeds, but simply spit them out. The animals’ digestive systems cannot digest them, so they are not edible to goats.

Of course, the pips from the argan fruit touched by the animals are not used to produce such expensive oil. Otherwise, shepherds could simply pick them up and make a good profit.

In 1999, UNESCO decided to designate Morocco a biosphere reserve. The aim is to protect the Argan trees, which grow in such difficult climatic conditions.

Fortunately, the animals have not been banned from eating the leaves and fruits of the tree. After all, the goats, when they come into contact with the branches, collect the seeds of the plant on their fur and then spread them around the area. In that way, they help to increase the number of trees.

The task of a shepherd is periodically to drive the herd from one tree and guide it to another.

The fact is that even a small number of goats – 8 or 10 – can eat the leaves of a mature sprawling tree in just a couple of hours. This will lead to the death of the plant. Therefore, shepherds are obliged to prevent the leaves on the crown from being completely destroyed and to drive their flock away from the Argan.

What is the kind of goats that climb trees in Morocco?

And perhaps the main question for anyone who has seen pictures or seen animals in trees in Morocco with their own eyes is: what kind of goats are they?

The Moroccan goat is in fact a very common goat. They are not a unique species endowed with acrobatic skills. It’s just that all goats, and many other animals, have an excellent sense of balance. This is why both adults and even little goats can easily balance on branches and tree trunks.

For those living in temperate areas, such a picture is strange. There is no shortage of fodder from the pasture for farm animals. We’re used to seeing goats grazing peacefully on the grass.

But it turns out that ordinary goats can easily climb trees and move around on thick branches. And all that drives them there is ingenuity and persistence in their search for food.

The role of tourism

Another reason you’ll notice goats in the trees is because of tourism. Farmers used to encourage them to leap up so that they could help “clean” the argan seeds, but today it’s more about attracting visitors to observe the unusually behaved quadrupeds and their joyful chewing. Many of the farmers charge for various services, such as taking pictures or posing with the goats. Tour buses bring groups in to see the goats, and the tour firms pay the farmers a stipend or gratuity for allowing them to bring tourists through on their route to other Moroccan locations.

If you attempt to take a photo without paying, you may be requested to pay.

What is the best way to see the goats?

To view these animals climbing the Argania tree’s branches, you’ll need to travel to Morocco. Usually via one of the major towns with an international airport.

Down below are the main starting points of all Morocco tours:

Once you’ve arrived in Morocco, go south of Marrakech to the Souss-Massa-Draa area, or contact us to customize your itinerary. You’ll like seeing Agadir, Essaouira, and the walled market city of Taroudant, which are all renowned tourist spots in the vicinity.

The Argania or Argan trees may be found growing throughout the highlands of this region, but for the best chances of seeing these bearded climbers, get off the busy highways and get into the mountains.

The Argan fruit ripens around June, so late spring and early summer are the best times to view goats climbing around on the trees. Other times of the year, they can be seen higher in the trees, although sightings aren’t as frequent.
If you’re tempted to take some of the fruit homes with you, keep in mind that governing bodies have stringent rules on who is allowed to pick the fruit. Instead, save your images or well-sealed argan oil items as souvenirs.

Where to see goats in trees in Morocco?

You can see goats on trees in the southwestern of Morocco along the way from Essaouira to Agadir.

Why are goats in trees in Morocco?

Goats are in trees to reach the Argan fruits and leaves.

Goats in Morocco do climb the Argan trees, however, there are also some people in some places that encourage them to climb in order to attract tourists.

Which African country has tree-climbing goats?

Goats climbing trees in Africa are in Morocco, exactly the southwestern area between Agadir and Essaouira.