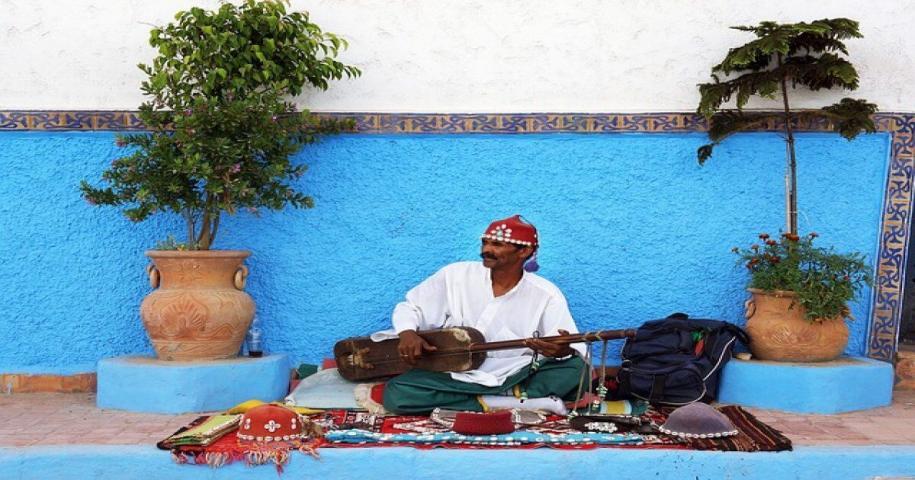 Posted by Touring In Morocco on March 8, 2021 | Featured | No Comments

The Gnawa brotherhood of Merzouga, a living witness to the slavery of the blacks of Africa.

The Gnawa music of Morocco forms a community of followers, priest-healers, and musicians. Who practice a variant of the popular cult of saints tinged with Africanisms. Although they are affiliated with the Mecca tradition, particularly through symbolic kinship with the freed slave of the Prophet Bilal. Many Gnawa have sub-Saharan origins.

The result is a “syncretic” cult where references to God and his prophet are found alongside names of black African spirits. The ritual of predilection of the cult is the “lîla” (the night in Arabic) where, after an introductory phase during which only the musicians dance. Come to dance the possessed on the 7 colors of geniuses who each have their musical tunes and their perfumes.

The Origin of Gnawa Music in Morocco:

Gnawa music in Morocco is much more than a musical genre, most experts define it as a trance-music. This culture has its roots in the history of the mass deportations of black populations: from Ghana to western Sudan, from Guinea to Mali. And again from Niger and Senegal to the Middle East and then to North Africa and finally Europe.

When people talk about the slave trade, they usually refer almost exclusively to deportation across the Atlantic Ocean. However, in equal if not greater measure, the forced exodus took place towards Africa and the Old Continent. Here, in fact, the rulers showed their appreciation for the merchandise, thus contributing to the increase in traffic.

This trade was initiated by the new conquerors, the Saudi Arabs: as early as 600 AD, occupying vast regions of the Middle East and North Africa. They employed the robust Central African populations in heavy labor. That is to say, the black populations carried out the most demanding tasks in agriculture and in the imposing constructions. In the army conquering new territories and also in domestic duties. Just in this context, a figure made famous by the novels stood out the eunuch. The imposing guard of the harem of the sultan, after a guarantee of “inoffensiveness”.

But if the deportation to the Americas took place by the sea, the one destined to the North took place with long and harmful trans-Saharan journeys (later outclassed by sea transport). During which an inevitable decimation occurred. There is still the news of this trade in the 20th century when some African states finally signed treaties to abolish the trade in human beings.

Where to listen to Gnawa music in Morocco?

In Morocco, the Gnawa music groups are very well known and they perform in the squares of the most famous tourist resorts. Marrakech and its square, Meknes, Fez and of course Agadir and Essaouira.

A music between rituals and slavery:

However, it would be reductive to identify Gnawa music only with the delightful and auspicious musical sound choreographed by gyrating dances. This is the most evident aspect of a representation that evokes the sufferings of exiled ancestors, uprooting from their land and slavery.

One of the highest expressions is the ritual of the “Lila”, which essentially puts the devotee in contact with supernatural entities. In the act, music and dance are experienced as purifying liberation, mystical approach, loss of consciousness, healing. Inevitably, one can still notice characteristics of ancestral animist religions (shared with macumba for example). Which, despite centuries of strict Islamization, survive hidden by the folklore of the acts. In the Saharan region, some villages are true Gnawa enclaves. Perhaps the most authentic colorful and eurhythmic testimonies of the people who from the exotic Toumbuctu. Probably the main marketplace transited towards the regions of the future Imperial Cities.

The Berbers of Merzouga desert call the nearby village of Khamlia “the village of the black people” where the Gnawa tradition has been practiced for centuries. Over time the inhabitants have organized themselves into schools of music and dance governed by the “Maalem”. The master of the confraternity, who usually plays the “Guembro”. A large acoustic bass, a guitar-drum with a wooden body, and strings made of a fiber obtained from the entrails of animals.

Other instruments used for Gnawa music in Morocco are the “T’bel” membrane percussion. Also, the typical Maghrebi “Garaqeb”, the large iron castanets played by the gyrating dancers. The strong emotional impact is the incessant polyrhythm of the percussion and castanets amalgamated with the hypnotic melody of the guitar drum.

With Touring In Morocco, you are able to visit the Gnawa people in Morocco during your Erg Chebbi desert tour. Book your tour from any departure location in Morocco, guided by Berber locals.