The hand of Fatma or Khamsa in Morocco 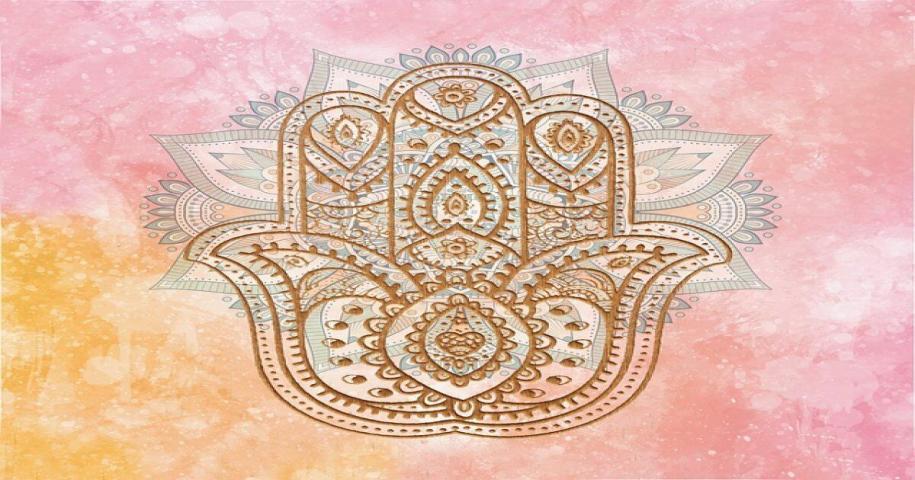 Posted by Touring In Morocco on August 8, 2020 | Featured | No Comments

Stories and meanings of the hand of Fatma:

Who hasn’t already seen a Fatma hand holding a front door or a keyring? This symbol of universal protection is spread all over the world. Composed of an open hand sometimes embellished with an eye, this pretty talisman is used to guard against bad luck. Originating from several cultures, it is a beautiful decoration to add at home to attract good fortune. In this article, Touring In Morocco tells you more about its origins and its protective powers.

Where did Fatma’s hand come from?

The hand of Fatma, also called khamsa, khomsa, or hand of Fatima, is a symbol used mostly in North Africa to protect against the evil eye. The term “khamsa” means “five” in Arabic and Hebrew, referring to the five fingers of the hand. Its symbol is very present in Berber customs and beliefs, where it serves as protection and good luck charm. It is often found on the doors of houses or in cars, in short, in any place where its effect could help the person possessing it.

At the crossroads of Jewish, Muslim, and other traditions, the hand of Fatma is the universal symbol of protection and benevolence. It is often turquoise blue, to symbolize the rejection of evil forces. The fingers of the hand can point up or down, depending on decorative preferences. Without affecting the effectiveness of the talisman. Present in several cultures, it has recently become a symbol of peace in the Middle East between Muslims and Jews.

The Hand of Fatma in Islam:

In Islam, the hand of Fatma represents the number 5, very symbolic in this religion. Also, this number is associated with the five senses, the five pillars of Islam and the five daily prayers. Fatma’s hand sometimes has an eye in the center of the palm, which is supposed to protect against the evil eye. Although Islam does not approve of superstition and symbolism, the hand of Fatma is still a relatively common para religious practice. In addition, It is very often found as decoration or jewelry in North African countries.

Other accounts report that this symbol was inspired by the story of the daughter of the Prophet Mohammed. Further, joining her father and children under a sheet, made a common prayer by raising her right hand to ask for divine protection. Not to mention, the angel Gabriel appears and joins them under the sheet, under which they stayed safe for a whole night.

On the other hand, certain rigorous readings have been added in recent years to the debates on the use of this symbol. In essence, these views oppose any rapprochement between the ritual uses of the Khmissa and Muslim narratives. Believing that the hand of Fatma would only be a superstition forbidden to believers.

Among the Jews, the hand of Fatma is called the hand of Miriam, in reference to the sister of Moses and Aaron. It can also be seen as a reference to the legend of the ten plagues of Egypt. Where the houses of the Jews were marked by the hand to protect them. Additionally, they had decorations of fish, symbols of good luck in Judaism, are sometimes added. It is also sometimes inscribed with Jewish prayers. Here, Myriam’s hand is linked to the sacred text, since it is set in parallel with the five books of the Torah.

Protecting yourself from the evil eye:

Fatima’s hand can be worn as a necklace or jewelry to protect against the evil eye. As a decoration, it will bring good fortune to a house. It is supposed to protect against the devil, the jealousy of those around her, and bad luck. Even more, It is often worn by women or to protect newborns. Wear it visibly, for example as a pendant or bracelet.

If you want to show a symbol of welcome and chase away bad vibes, put Fatma’s hand on the front door of your house. That is to say, this is a good way to have a welcoming and soothing home. A little tip: prefer the turquoise Fatma hands, which are closer to tradition!

Influences of the disappeared pagan religions:

In Fatma’s hand, the number five is representative in several respects, since it refers to the number of books of the Torah in Judaism and to the pillars of the Muslim religion. Raised with the fingers towards the sky, this amulet indicates power and blessing. Placed in the opposite direction, it is often combined with an eye to symbolize love. Good luck and protection from bad luck.

The accounts indicate that in Judaism, the Khmissa, or the sign of the hand of Fatma known as such today. Symbolized protection from the time of Moses in Egypt. “It is related to the story of the ten plagues that struck the Egyptians”. According to the twelfth chapter (verses 3 and 4) of the book of Exodus.

In this passage, it is recommended to the people of Israel that each house take a lamb and use its blood on its doors (verse 7). Under the orders of Moses, the men dipped their hands in this blood to put it on the doors, marked by five-finger handprints.

The Egyptians finally realized that the Jewish houses bore the sign and that God recognized them. Sparing them and striking others. Thus, understanding that this handprint protected Moses’ followers, it was increasingly adopted by the various communities in Egypt.

The symbolism of the phalanges:

Each hand has 14 phalanges. Multiplied by two, this gives 28, a number that would correspond to the 28 letters of the Arabic or Hebrew alphabet. In the Arabic alphabet, there are two groups of letters: the solar letters, and the lunar letters. This makes 14 “solar” phalanxes on the right, or south, on the dayside, and 14 “lunar” phalanxes on the left, or north, on the night side. Indeed, the north is associated with the night, and the south is associated with the day.

The tradition of Eid :

On Eid-el Kebir day, it is common to see red handprints on the walls of houses. Made with the blood of freshly slaughtered sheep. Since the recommendation of Moses, the houses marked with handprints have had their newborns spared from death according to the legend.

The Jews call her the hand of Miriam, in reference to Miriam, the sister of Moses and Aaron. Khomsa is a term both Hebrew and Arabic (the Arabic and Hebrew languages are cousins. Also, they have a lot of vocabulary in common, or at least in the root of the words).

The legend of the “hand of Myriam” refers to the episode of the ten plagues of Egypt, when Moses ordered his men to paint, with sheep’s blood. The top of the front door of every Jewish house. To save time, they dipped their hands directly in the blood and applied their palms over the doors of the Jewish houses.

All Egyptian first-born found death even in the first-born of the animals. While Jewish first-born children were spared.

The Egyptians finally realized that Jewish houses bore the sign of the hand (Khomsa) with blood. For the Lord God had recognized the blood of the Lamb.

The Egyptians understood that this symbol had saved the Jews.  Therefore, they also adopted the sign of the hand.

The Legend of Fatima:

In Fatima’s home lived her husband Ali, her two children, Hassen and Hussein, and Fatima’s father, the Prophet Muhammad.

The relation between the hand of Fatma and Women:

It looks like five fingers but the two at the ends are actually two thumbs, expressing the idea of two hands superimposed. This gesture refers to an invocation, a gesture of hope. An eye is often represented in the center of the hand, recalling the symbol of protection for women against the “bad eye”. In other words, a bad blow from fate, the evil spirit found in various beliefs.

The different bracelets of the hand of Fatma:

The symbol of the Hand of Fatma has become so well known that it is now used in the design of many pieces of jewelry such as rings, necklaces, and even earrings. However, there is a certain trend

for Fatma’s hand bracelets which can be designed using different materials. The most popular ones are silver, gold, leather, and cord bracelets. Although, beaded and wire models are very popular.

Particularly appreciated by women, the silver Fatma hand bracelets are very elegant jewels that are perfect for a chic and refined style.

However, some models can be relatively expensive depending on the type of silver or the brand for example.

Undoubtedly the most widespread model, the hand de Fatma cord bracelet is very appreciated for its sobriety and its relatively accessible price.

The adjustable size of the cord also makes it suitable for any type of person, even men, and women with very small or very large wrists.

In addition, the adjustable cord is ideal for ensuring optimal wrist comfort.

Pearls are a material that is frequently used in the jewelry industry, and not without reason. Indeed, pearl bracelets are very original pieces of jewelry and there is a multitude of different pearls such as cultured pearls or natural stone pearls.

Opting for a Fatma handcrafted pearl bracelet is a wise idea if you are looking for a refined piece. Also, original and meaningful piece of jewelry.

It is true that Fatma’s leather hand bracelets are mainly used by men but there are also some models for women that can be very attractive.

However, this type of jewelry is much less popular than the beaded and cord models.

– THE FATMA HAND BRACELET MADE OF WIRE:

A fine and refined jewel, the Fatma’s handcrafted wire bracelet is usually designed using a red wire but it can also be made of silver.

These models are easy to find at relatively low prices. But, you will still have to be careful because they are extremely fragile jewels.

looking for the Hand of Fatma in Morocco? contact us!